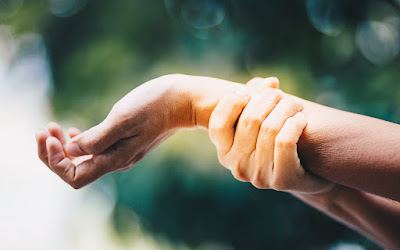 At the beginning of all of this I remember waking every day with the worst pain and stiffness in my fingers. It took maybe two or three hours for it to get better, but the pain was still there - it just eased a little. I’ve never experienced pain quite like it and I don’t think I’ll ever be able to describe it to anybody.

I often wonder if we all feel the same in regard to the rheumatoid pain, or was it just so bad for me? I do know that as the weeks went by, I started to feel worse, so that some days I couldn’t keep my eyes open because I was so tired. No amount of sleep seemed to help - I just couldn’t catch up (I did also have a new baby so catching up with sleep was never easy, ha!). The days became a gradual procession of pain, so I would wake up and there would be something new that was hurting, and I just didn’t understand why. Some days I needed family members to help me with my new baby while Mike was at work. I mean imagine that - you have a new baby and you can’t even look after it! At the same time, I was wondering how I was going to cope with this, how anybody could manage to live with it.

Off to the GP and the first shock

I went off to a first appointment with my doctor, and he did numerous tests, just checking out my joints and looking for swelling. He did little tests that would determine how much pain each joint was in on a scale of 1-10. This would be tracked so that the next time I came they could flag up any changes. He discussed the medication I would be on called methotrexate and told me I had to attend a meeting about it due to it being such a strong medication and also told me I would likely take something along side the methotrexate called hydroxychloroquine... Well, this was all too much. I understood this was a long-term condition, but I definitely wasn’t prepared for meetings about medication I was going to be taking for the rest of my life. Who can be prepared for that? One day you're having the time of your life and your baby is about to arrive, the next thing you know your baby is here and you discover you have a life changing condition, you're going to be on medication forever and you have absolutely no choice about it because if you don’t take it the outcome is going to be far worse.

The main problem was, I have always been somebody that has never taken medication, not for anything. I don’t like taking tablets and before I would only ever take them if I was in a lot of pain. So, for me, being prescribed medication for life was such a huge deal. And no, it isn't just as simple as taking the tablets and you're all set, not at all. I’m three years into this condition, and I’m still not on the correct dosage. I don’t even know if I am even on the correct medication! It is such a long process; you don’t just get to live and move on. It can take so long to get to a stage of remission and that is the most frustrating part. I can’t just be OK. I can’t just move on and live my life with my beautiful children and fiancé in my lovely new home.


Putting on a Brave Face

I was still not taking medication as of course I wasn’t allowed to until I had attended the meeting about taking it! Madness. So, while I was waiting for a date to attend, my condition got worse. I started to get terrible pains in my knees, my ankles and toes. I again had to have help and support from my family, but how is this a normal way to live? They have their own lives, and I felt they did not need to be looking after me. I told myself they didn’t need this, I told myself I couldn’t have them help me and I couldn’t rely on them because it wasn’t fair. I stopped talking about it, put on a brave face and pretended everything was OK. I decided I wouldn’t ask for help and would just get on with it. I did however tell my consultant about the huge amount of pain I was in to see if he could help me in the meantime. He prescribed me prednisolone (steroid tablets) and they seemed to help, although I knew this was not a long term option.

I eventually got the date for the methotrexate medication meeting and the date soon arrived. I took Mike with me because I felt I would need some support. In this meeting there were other people, maybe six or seven of us in total and all of them must have been feeling just as anxious as me. I was surprised to see young people among them. There is so much information out there about this condition only happening to older people, I’d just assumed that was the case. As awful as it sounds, I felt slightly better knowing there were other young people there too.

The meeting itself basically consisted of trained nurses telling us everything we needed to know about the condition and all about the medication we would be taking. Also, what we should and shouldn’t be doing with regard to managing the condition. It was all a bit surreal, as people were asking questions and then getting upset at the response, so we would have to pause to let them recover. I had so many questions myself, but I just couldn’t ask them, I was so overwhelmed and knew that if I spoke I would burst into tears.

Now, a lot of people might be reading this and think well, at least with medication the condition can be controlled and treated. Well of course I know, this is treatable but that doesn’t stop me hating every single ounce of whatever this is that’s happening to me. It’s treatable but it will never ever go away. This is me, forever and this meeting just proved to me that my life was going to change whether I liked it or not.

Popular posts from this blog

December 12, 2020
As it happened, having Covid wasn’t as bad as I feared. I suppose I got so worked up and panicked because of being ‘vulnerable’ and everything I'd heard about it. After testing positive I called my consultant to find out how it would affect my medications. Because they are immunosuppressants I was advised to stop taking them. I had to top up on paracetamol and ibuprofen instead, keep checking my temperature and call if I needed help! 10,000 Steps Forward... The first few days I had the worst headache and what felt like a burning nose and a slight cough. No persistent temperature though I did keep going hot and cold, and no dry cough either. So I thought, ok this isn't so bad, let's hope it stays this way. I carried on with my 10,000 steps a day, doing the housework, YouTube workouts, walking on the spot, up and down the stairs and dancing with the boys. You name it, I did it, Ha! Until about the fourth day, when I felt like a bus hit me. Everything ached, and I had zero ene
Post a Comment
Read more

Further complications and a minor crisis

July 26, 2020
In the coming weeks I started to feel a little better, at least mentally. I got it all off my chest with the family letter, and felt I was coping. There was a nagging doubt, however, because the way I was feeling physically wasn’t right. I was in pain in places that didn’t seem to fit my diagnosis of rheumatoid arthritis (RA); namely my upper arms and forearms, shins and thighs. I was also a bit confused and lacking concentration — often I would be mid-conversation with someone and suddenly forget what I was going to say. If my boys were playing and one of them accidentally banged into me, it hurt so much, and the pain took a long time to go away. Crazy right? Who knew babies could be so brutal! I stubbed my toe one time, which we all know can be painful, but this was something else. It was so bad I thought I’d broken my toe, and I couldn’t seem to get over the pain. Ha, ha, yes, I know I may be a drama queen but, joking aside, it started to worry me. And then there were two I mentione
2 comments
Read more

Disorder of the Day

September 03, 2020
I don’t ask to be like this, trust me I would rather be living a normal, pain-free life. But the reality is I will never be that ‘normal’ person. I will always be a girl living with chronic and mental illnesses, and with that comes the good, the bad and the ugly. It’s hard enough to admit this to myself, but having people doubt it, as I mentioned last time, is not the greatest feeling. To add to my woes, and probably as a result of all that’s happened to me in the last two or three years, I’ve recently been diagnosed with Health Anxiety and Panic Disorder.   To break it down a bit, Health Anxiety is when you spend so much time worrying you’re ill or about to become ill , it starts taking over your life. Symptoms include: Always worrying about your health Constantly checking your body for changes Seeking reassurance from others that you’re not ill Worrying your doctors have missed something Obsessively looking at health information on the internet or in the media Avoiding anything t
Post a Comment
Read more